NaNoWriMo 2015 Day 02 – 3775 words. I think it is the most I have written in one day ever. I had an outline but a lot of patches that I found promising ways to fill. Many more distractions today than yesterday, including house painters, so I worked very late at it, but I am pleased to have beaten the goal on this biggest single day of my schedule.
One good thing about being a slow blogger is that you don’t have as much to undo.
At several different points this past year I was convinced I had found a way to use a small touchscreen device – sometimes a tablet, sometimes my phone – in a way that helped my writing more than the extra work it took to use. I even wrote posts but never finished them.
None of my tools survived so much as a week. While the hardware form-factor was pleasant, the compromises of using apps designed to take over the screen and only open one document at at a time (with no local storage) was too inconvenient for long-form writing.
That said, I had some fun. My most noteworthy creation was to take a hinged keyboard for a tablet, and replace the tablet with plexiglass and poster-hanging putty, to make a rest for the phone. 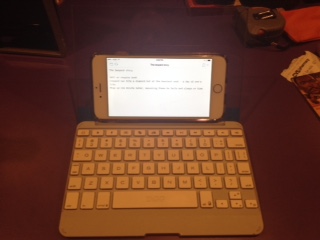 It worked well enough that I know in a pinch I could do remote work on it at length. Despite its appealing 1970s-tech look, I wouldn’t want to.
The real question of course is why I do this. END_OF_DOCUMENT_TOKEN_TO_BE_REPLACED