Less tool than fetish, and disappointing.
Funded on Kickstarter, the new Freewrite is a solid, lovingly-crafted device that promises to return writers to a place of distraction-free spontaneity. From its low-power e-ink screen to the aluminum case – with handle – to the deep-traveling satisfyingly-clicky Cherry keys, the Freewrite consciously recalls early computers, manual typewriters, and a more physical, engaged time. I love touching it. Really. 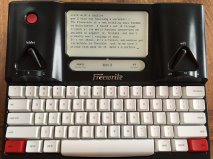 Alas, none of those keys moves the cursor.
“Distraction-free” writing is not a method like touch-typing, but an ideal. For some, it means paper. For others (like me), it means starting my work in a text editor, not a print-oriented word processor like Word or OpenOffice. For still others, it means gimmicky apps that literally delete your writing if you pause too long. Whatever works, right? And if it doesn’t work, you can do something else.
Not on the Freewrite. For the Freewrite, “distraction-free” means, and only means, a weirdly oppressive no-turning-back mentality, like Allen Ginsberg’s “first thought best thought” warped from liberating ideal into blind diktat without recourse.
You can only keep keying. You can’t go backwards, save to delete – and that has the acceleration of a Tesla, one word, two words, a paragraph whoa! You can’t go up three lines and add a header. You must go forward, only forward, like Orpheus leaving Hades.
I don’t even write that way on paper.
The Freewrite also requires a better computer to finish one’s work. Just getting text out of it – set up a special account, to either e-mail the work as an non-editable PDF, or to push it into Dropbox folders as Word .docx files – is a ridiculous kluge, a giant chicken-wire afterthought that makes the whole Freewrite process feel like something out of the movie Brazil.
Even philosophically, the non-choice between two proprietary, print-oriented formats utterly violates the spirit of portability and usability the device supposedly celebrates. Would plain-text files and a USB port have been so hard?
Worst of all, there’s no way to import anything into the Freewrite, or even to open a previously closed file. Maybe this is fine for a blogger, but for a novelist, it’s absurd.
The Freewrite costs as much as a high-end tablet, but I can do more for much less on my smartphone with a $5 app and a $20 Bluetooth keyboard. (Or even a $200 Filco wireless mechanical keyboard.)
With just a little more flexibility, the Freewrite would be an unusual tool, but an ultimately useful one. Alas, it is so rigid as to be a mere fetish object, the expression not of freedom but of masochistic rigidity – not a Freewrite, but a Mustwritethisway.
As a thank you to its supporters after the Kickstarter campaign, Freewrite (then called Hemingwrite) sent out a lovely laser-etched wooden coasters, with the wise advice WRITE DRUNK. I’ve been using mine for a year. It has held many liquors and a good deal of coffee too.
After twenty minutes on the actual Freewrite, I burned the coaster.
Had I actually been drunk, I would have burned the damn machine. 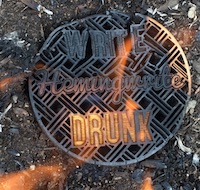