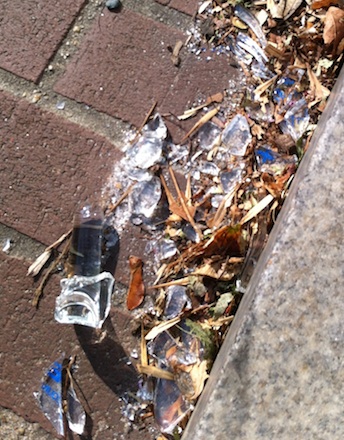 A couple weeks ago someone left a Pyrex liter measuring cup outside the apartments across the street. I was tempted to take it to keep it from becoming trash. But, whoever forgot it might soon remember it, so I left it. Of course the next morning it was broken. Now the street has this instead. It’s slowly being pulverized into smaller and sharper bits, and has already spread back up the curb-cut onto the sidewalk my dogs and I cross to get to the dog park. Our own little Peter Greenaway film, with real injuries.
Last week on Doctor Who Amy and Rory were home between adventures, cleaning out the fridge. Amy smelled an old leftover, wrinkled her nose and tossed it. I think this act will become a dramatic shorthand for the 21st century, as cigarettes are for the 20th, six-shooters the 19th.
Shout out to prolific profane poet Bud Glory!
==
Trash
I’m appalled by how much garbage I make,
haunted by wrappers, boxes, plastic trays,
bags of vegetables (organically raised!),
yogurt cups, the styrofoam with my steak.
A coffee drink comes with a cup, straw and
lid — I buy three a week. Catalog stores
ship boxes, packing peanuts, more
clothes and computers. My old PCs stand
dusty in closets, now too slow even
for charity (which still accepts old clothes).
Soap pump-bottles, toothpaste tubes, all trash when
they are empty. Whatever I buy, I dispose
of some part. I know better but want trumps
reason. All my desires end in dumps.
It has unhinged me. It’s a craziness.
My shame at my trash won’t leave me alone.
If I throw away one can, I atone
later by recycling two more. A mess
of sports-drink bottles near the basketball
court, lonely beers forgotten on the curb:
uncapped mouths, pleading for rescue. I’m disturbed
and getting worse. Soon the children will all
point. “Neighborhood wacko. Picks up trash.” Not
enough, alas, to ever compensate
for what I’ve thrown out. It will never rot,
never disappear or evaporate,
my garbage. It just sits, useless, inert,
somewhere out of sight, buried in the dirt.